What You Should Know about Synthetic Hormone Replacement Therapy (HRT) 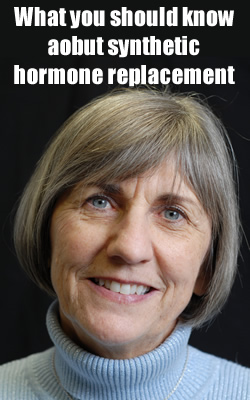 The most widely prescribed hormones used in conventional HRT have been extracted from horse urine (makes you think twice about putting that pill in your mouth, doesn’t it?). Aside from being just plain disturbing in origin, the molecular structures of these hormones differ from those produced in the human body, which could explain why horse-hormone HRT has been linked to various health problems including heart disease. With all of these drawbacks, it doesn’t make sense to me to prescribe horse-hormone HRT to women I work with. Especially when it’s possible to use identical-to-human (bio-identical) hormones, which don’t have any side effects or potential long-term dangers.

The difference between conventional HRT and bio-identical hormone replacement HRT can be confusing, so it might help to know a bit about the basic biology behind them, starting with three major types of estrogen present in a woman’s body between the onset of menstruation and menopause: estrone, estradiol, and estriol. With natural hormone replacement therapy, these estrogens are used along with natural progesterone in proportions as close as possible to those produced in the body.

For any treatment to be effective, compliance is the first step. Yet, only 20% of women on synthetic hormones continue to take them after two years, mainly due to development of side effects.

Consider instead what Natural Hormone Replacement Therapy can do for you.

Here’s what we know. With one exception, the major studies either fail to distinguish among types and dosages of HRT used in the study, or examine only synthetic HRT preparations. This occurs primarily because pharmaceutical manufacturers, who profit by selling patented synthetic hormones, usually fund studies. Bio-identical hormones, which are chemically identical to hormones produced naturally in the human body, are not patentable. Most bio-identical preparations are customized for the individual patient by a compounding pharmacy.

With the exception of the Postmenopausal Estrogen/Progestin Intervention (PEPI) study, major studies have either failed to distinguish among types and dosages of HRT used in the study, or examined only the use of synthetic HRT preparations (as in the case of the Women’s Health Initiative). The Women’s Health Initiative (WHI) study was designed to identify the potential risks and benefits of HRT. The estrogen-progestin portion of the clinical trial was stopped in 2002 after results showed that a synthetic hormone combination containing conjugated equine estrogens (CEE) plus medroxyprogesterone acetate (MPA) increased the women’s risks of developing invasive breast cancer, heart disease, stroke, and pulmonary embolism.

Many patients and medical professionals are unaware of the availability of bio-identical alternatives. In reality, women’s experiences and clinical outcomes of HRT differ vastly depending on the dose, dosage form, and route of administration, and most importantly, whether the hormones are synthetic or bio-identical. As a result of concerns and doubts generated by studies that use synthetic hormones, many women who could substantially benefit from bio-identical hormone replacement may never have the opportunity.

Published research delineating the differences between natural bio-identical and synthetic HRT is now more abundant, but studies of bio-identical HRT will probably never be as plentiful as those dealing with patented synthetic hormones. Atlas Drug & Nutrition welcomes your questions.

It is regrettable that various guidelines address hormone replacement in general terms, with all forms of “HRT” lumped together as if they were a single medication. In reality, women’s experiences and clinical outcomes of HRT differ vastly depending on the dose, dosage form, and route of administration, and most importantly, whether the hormones are synthetic or bio-identical.